Morse keys, the Morse Code and the associated Morse telegraph system may seem outdated now but they revolutionised World communications and enabled messages to be sent almost anywhere very quickly.

Prior to electrical forms of communication it took many weeks for messages to be sent to the other side of the world. Australia was a very remote outpost of the British Empire for example. However with the introduction of the Morse telegraph system all this changed.

Messages could be sent quickly and efficiently in Morse code and as a result the system expanded very quickly enabling remote or outlying areas to be linked to the centres of civilisation.

Morse has an idea

All this started with an idea that dawned with Samuel Morse when he was returning from a trip to Europe. He was an eminent artist, but with a keen interest in the developing sciences, he had visited Europe to further his understand of the styles used their. On his return by ship he had plenty of time, and discussions took place on the ship. Out of these discussions ideas started to dawn in Morse's mind for an electrical communication system.

After his return, progress on developing his ideas for a communications system were slow. Eventually he enlisted the help of others including a man named Alfred Vail, a gifted mechanic. Progress became much faster and by 1838 they developed a system using dots and dashes to represent letters. Next they needed to secure funding for a trial system. This proved to be very difficult to achieve and the team Morse had brought around him drifted away. Nevertheless Morse was undeterred by the lack of interest, and he continued without most of his other partners. Finally he succeeded in securing funding to develop and install a trial 65 km line between Washington and Baltimore. It was completed in May 1844 and on 24th May Morse sent the first message "What hath God wrought!". The content of this message was chosen from the Bible (Numbers Chapter 23 vs 23) by Annie Ellsworth the young daughter of a good friend.

After the successful demonstration of this first line people quickly realised the value of the new system and its use spread very rapidly. Within a year many new companies came into being to run lines to all parts of America. New lines were installed, often along side railroad tracks. This enabled the railroad companies to keep in contact with trains and by knowing where trains were and whether there were any delays they could use the single lines that were installed more efficiently. It was also found that towns that had been isolated now had communications links with the outside world. Previously communications relied on stagecoaches or the Pony Express, requiring days or weeks to cross the whole of the USA. In fact so successful was the Morse telegraph that only 19 months after the Pony Express was started it had to be discontinued. 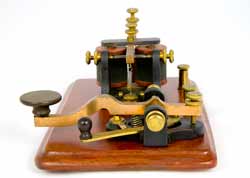 Not only was the Morse system used in the USA, Europe and the rest of the world used it because of its effectiveness and simplicity. The first European line was set up between Hamburg and Cuxhaven in 1847, and many others quickly followed suit. Soon the need to link countries across seas and oceans was realised and in 1866 a submarine cable link was established between Britain and the USA, and by 1872 a link to Australia was established.

As a result of the vast use of the telegraph, stations were set up in towns, and in many remote areas repeater stations were required. Often new towns arose as a result of these. One famous example is Alice Springs in the Middle of Australia. Here a line was required from Adelaide in the South to Darwin across the centre of Australia so that messages could be sent to Darwin where an underwater line enabled messages to be sent to London. Alice Springs was one of several repeater stations required across Australia and it was located near a suitable pass in the McDonnell range of mountains. The town was near some water springs and it was named after the wife of Sir Charles Todd who erected the line. 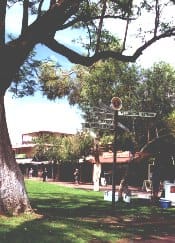 The centre of Alice Springs today

Many changes occurred as a result of the introduction of the Morse telegraph system. Not only did it enable outlying towns and villages to keep in contact with the outside world, but it also meant that information reached its destination far more quickly. This meant changes in many areas of life. The stock markets that previously only had access to information that was weeks old now received information that was hours old. Practices had to change to take account of the fact that up to date information was received.

The speed at which information could be sent meant that many areas of life started to speed up. At war up to the minute intelligence was of paramount importance and in the American Civil War, many telegraph operators were in the front line to send back vital information. The bravery of many of these operators was outstanding, but as they were not in the Army, none received any gallantry awards.

The telegraph was also used to carry back the information about the end of the Civil War. After General Grant accepted the surrender of General Lee on 9th April 1865, he sent the message: "General Lee surrendered the army of Northern Virginia this afternoon on terms proposed by myself the accompanying additional correspondence will show the conditions fully".

The Morse code was widely used for wireless transmissions, especially in the very early days when it was not easy to modulate a signal to carry sound. As a result many historic transmissions were made using Morse code. One was the first transatlantic radio transmission made by Marconi on 12th December 1901. This made headline news on both sides of the Atlantic.

Some years later another incident of major importance occurred. In 1912 during the maiden voyage of the Titanic, the liner steered a northerly course to shorten the distance travelled to try to make a record breaking crossing. Unfortunately she struck an iceberg on the night of 14th April and although she had been declared unsinkable, the great liner rapidly took on water and sank. The two wireless officers sent out the distress signals. Alas the wireless operator on the nearest ship was asleep and did not hear the call. However the distress signals were heard on both sides of the Atlantic as well as by the SS Carpathia that was about 93 km away. As a result Carpathia steamed towards the stricken liner only to reach the area an hour and twenty minutes after Titanic sank. Fortunately around 700 souls were rescued, but over 1500 people died in the tragedy.

The development of communications systems did not stand still and as a result the use of Morse has declined considerably in recent years. The introduction of the teleprinter spelt the end of the use of Morse over landlines. Using the teleprinter it was possible to use a keyboard to enter messages, and a printed copy was provided at the far end. In Britain the Post Office discontinued the use of landline Morse in 1932, although in the USA and Australia its use continued until the 1960s.

The use of Morse over the radio has continued for many years after this particularly for ships. However the use teleprinters and then computers combined with the growing use of satellite communications meant the end for Morse. Finally from midnight on 31st January 1999, international regulations no longer required ships at sea to be able to make distress calls in Morse.

Despite this some ships, especially those from the third world still use it as a low cost alternative to the more expensive satellite systems. Also radio amateurs still use it widely because it offers advantages in terms of the simplicity of the equipment and being able to make contact under conditions when other forms of communication would not be able to get through. As a result its use will continue for many years to come, continuing a tradition that is over 150 years old.