The vacuum tube or thermionic valve brought the dawn of the age of electronics. Its invention enabled the wireless technology of the day to move forward.

The history of the vacuum tube or thermionic valve brings many individual discoveries together that enable the invention to be made.

The history of the thermionic valve also moves on to tell of the further developments that were made.

All these individual elements take their place in the overall history of the thermionic valve or vacuum tube. 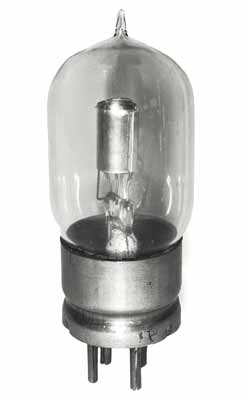 Early Valve - possibly from around 1910

During its history the vacuum tube or thermionic valve has played a pivotal role in many historical events and its invention has changed the way of everyday life.

As the need to valves / tubes grew, so did the requirements for their performance. To meet these needs operation at higher frequencies was needed along with higher levels of stability, gain and predictability.

Initially valves were expensive and only used in very small quantities. As an indication of this growth figures from the RCA company show that they sold about 1.25 million receiving valves or tubes in 1922 but by 1924 this has risen to 11.35 million.

Some of the key issues with valves that prevented their adoption were not only the cost of buying them, but the cost of running them. Early valves used directly heated cathodes and as a result required batteries to runt hem. Once indirectly heated valves were developed, this opened up their use considerably and they were more widely used in radios. In addition to this the superheterodyne radio required more valves to be used than the equivalent tuned radio frequency receivers started to be used around the late 1920s and early 1930s because of their superior performance. As these receivers were sued for domestic radios, the requirement for valves rose even more.

The outbreak of World War 2 was a key point in thermionic valve history. These devices came into their own as they were needed for electronic equipment of all sorts from radio receivers to transmitters, radar sets, electronic warfare equipment, telecommunications repeaters and much more.

During this period, valves were produced in vast quantities on both sides.

After the war, new requirements were placed on valves and the valve history or vacuum tube history shows that there was a major move towards miniaturisation. Early valves and their equipment were large. Now smaller equipment was needed and as a result smaller valves were produced.

However with the invention of the transistor in 1949, and its ultimate commercial use, the transistor was smaller, more reliable and consumed less power. Although initially they were not cheaper than valves, the prices soon fell leaving valves only used in some areas where their performance was superior. However as transistor and FET performance improved, there were very few areas were thermionic valve technology was superior to that of transistors. Accordingly the valve history shows that their use fell away sharply in the 1960s and by the 1970s very few valves were used.

Thermionic valve or vacuum tube technology developed to enable considerable degrees of functionality to be introduced into radio receivers and then the wider field of electronics.

Vacuum tubes or thermionic valves are based around the concept of thermionic emission. Using two electrodes enables diodes to be made that can rectify signals - further electrodes can be added to enable amplifiers to be made and other applications fulfilled.

There are some key dates in the development of the thermionic valve or vacuum tube. These dates are tabulated in a valve history timeline below: 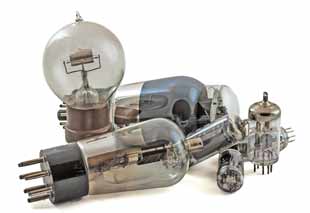 The valve history of tube history shows many improvements and developments are made to the basic concept. Over the years the performance the this technology improved beyond all recognition. Many different people each played their part in the history of the valve.