The test meter or multimeter is one of the most flexible items of test equipment.

Anyone who needs to look at electrical or electronic circuits and systems may need to use a test meter or as they are often called: multimeters in view of the fact that they are able to make a multitude of electronic and electrical measurements.

The multimeter can be used for measuring a variety of basic electrical quantities. Traditionally they were used to measure current, voltage and resistance, but modern digital test meters are able to measure many more quantities.

The test meter or multimeter can trace its origins back to the invention of the galvanometer around 1820.

Initially all test meters were analogue as digital technology was still many years into the future.

Galvanometers were large instruments that gave a deflection when a current passed through its coil. Typically to measure voltage and resistance a Wheatstone bridge configuration was used where the bridge balanced when resistors or voltages matched.

The Wheatstone bridge was not suited to many applications as it was large and slow to use. As a result, specific voltage test meters and current test meters started to appear.

... the AVO meter was improved but kept its basic design over many years.... 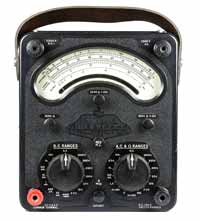 The development of what we know today as the multimeter is attributed to a British Post Office engineer named Donald Macadie. Rather than having to carry a number of separate instruments with him to service and fault find telecommunications circuits, he wanted a single instrument. Accordingly he developed a test meter that could measure current, voltage and resistance. As it measured Amps, Volts and Ohms he called it an AVO meter.

This AVO test meter consisted of a single moving coil meter with a set of switches and precision resistors that enabled it to provide a variety of measurements and ranges.

A company called the Automatic Coil Winder and Electrical Equipment Company was formed to manufacture the new test meter.

Although Donald MacAdie was a shareholder of ACWEECO, he continued to work for the Post Office until his retirement in 1933.

The AVO meter was manufactured for many years, with successive versions introducing better accuracy and more capability. However the basic format remained the same until it ceased production as digital types took over.

The analogue multimeter was the first form of test meter to be introduced. As the name implies it uses analogue techniques to measure and display the readings. Although digital technology has in many ways overtaken these analogue meters, they can still be bought and they are widely used in a number of areas.

Analogue multimeters are less widely used these days although some people still prefer to use them.

The digital multimeter, or DMM is now the most widely used form of multimeter. Using digital technology, it can make very accurate measurements and many of these test instruments can make a host of measurements beyond the basic amps volts and ohms of the analogue test meters.

Digital multimeters are the most widely used for of multimeter offering the advantages of many measurement types, low cost and accuracy.

It is possible to make a variety of measurements using multimeters / test meters.

Multimeter test meters come in a variety of shapes sizes and they have differing degrees of functionality and performance. As a result the multimeter prices vary according to what is being bought.

The prices for low end multimeters can be as low as a few Dollars, Pounds or Euros. However, multimeters from well know manufacturers will be more expensive. Some can even cost a hundred dollars or more.

Multimeter prices vary considerably between the unknown manufacturers and the established well known brands. When buying a test meter it is necessary to consider its usage. Some of the low cost ones will be fine for many applications – their accuracy will be good under normal conditions. The well know brands with higher multimeter prices can be justified where guaranteed performance is required. Also when working on high voltages, reputable brands will be able to provide the required certifications needed.

As a result, when considering multimeters, prices and performance it is necessary to consider the application, the requirements and decide what is needed.