Fleming's discovery of what he termed his oscillation valve, was major milestone in the development of what we know today as electronics.

Thermionic of vacuum tube technology was to change the direction of electrical science and spawn the new field of electronics.All of this came out of investigations into wireless or radio communications technology.

In 1899 Fleming became a consultant to the Marconi Company in addition to his duties at University College London. This was a post that he held until shortly before his death. At this time, wireless, as it was then known, was still in its infancy and Marconi was continually making an improvement in the distance that could be achieved using his radio communications systems.

In 1901 he succeeded in sending a message across the Atlantic. Fleming had designed the transmitter for this great achievement and had become very absorbed in the subject.

Fleming was noted as being somewhat eccentric. During his experiments with transmitters he would always use the letter V sent in Morse ( . . . - ) as the test letter and he became so involved in this work that he would often be heard unconsciously humming the letter V or whistling it between his teeth.

Fleming had previously become involved with wireless through Maxwell who had devised his electromagnetic theory that proved the existence of these waves. Now Fleming was involved in moving this further forward. As such he was aware of the limitations preventing further progress. He was acutely aware of the insensitivity of the detectors. The coherer that was the most common way of detecting signals was not particularly sensitive, although it had been refined to a remarkable degree.

It was now that Fleming recalled the Edison Effect he had seen many years earlier in the USA. Although he had experimented with it in 1883 and later in 1896 and had special lamps made he could find no use for it. Others had also seen that the effect and noted that it could be used to rectify alternating currents, but it was Fleming in a stroke of genius who realised that it could be used for detecting radio signals.

Fleming had what he described as a "sudden very happy thought" one day when he realised the possibilities. So in October 1904 he asked his assistant, G.B. Dyke to put the idea to the test, and it worked. Thus it was that on one day in November 1904, Fleming was seen "scudding down Gower Street" in London, oblivious to all around him on his way to patent the idea.

The new invention that Fleming called his oscillation valve because of its one way action was a dramatic improvement over anything that was available at the time. It enabled weaker signals to be detected, and for the first time it allowed high frequency measurements to be made. 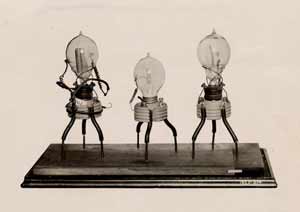 Shortly after his discovery Fleming wrote to Marconi to tell him of his discovery. In the letter he mentioned that he had not mentioned the idea to anyone as he thought it might be very useful. Little did he know of its importance, although he entrusted the patent to the Marconi company. However it did not bring any money to them. Any returns from the invention made were used in fighting the legal battles that were to arise later.

The invention of the diode valve or vacuum tube was a revolutionary idea, and put down the foundations for many further inventions. However it had very little impact at first. "Valves" were expensive to make and on top of this other ideas were overtaking him. In less than two years the cat's whisker was produced. This was a very crude form of semiconductor rectifier that consisted of a thin wire positioned on a lump of suitable material (even coal) to produce a point contact rectifier. This was far more convenient than Fleming's diode and it soon caught on.

In the USA, Lee de Forest was also interested in thermionic technology, and undertook a number of investigations into Flemings valve. He developed the idea further, introducing a third electrode he named a grid between the heated cathode and the anode. He only used the device as a leaky grid detector, it use as an amplifier would take a few years more. He took out a number of patents for his developments between 1905 and 1907. The first development was a diode that used a double battery and he called the device an "Audion". Fleming felt that his invention had been plagiarised and a bitter row broke out. The scientific community sided with Fleming, although when tested in the law courts de Forest's patent stood. However Fleming never claimed any credit for the introduction of the grid.

A year later de Forest introduced a three electrode device for use as a detector. It would take a few more years before it was used for amplification. De Forest called this device an Audion as well, giving rise to much confusion. It is worth mentioning that at no time did Fleming claim to have invented the triode.

Fleming continued at University College London, UCL and only resigned his chair in 1926 at the age of 77 after 42 years in the post. He retired to the quiet seaside town of Sidmouth in Devon UK and today there is a plaque outside the house in which he lived.

Despite being retired, Fleming still took an active interest in many new developments in the electronics world. For fifteen years he was president of the Television Society, often travelling to London for their meetings.

Two years after his retirement John Ambrose Fleming was knighted for the many advances he had made to electrical and electronic engineering. This was only one of many honours he was given.

Although he married twice he never had any children. His first wife, Clara Ripley who he married in 1877 sadly died in 1917 and it was not until 1933 that he remarried, this time to Miss Olive Franks.

He had many "interests" outside his work. He had a keen interest in photography and loved walking. He was also a devout Christian, and this became more obvious in later life. He often preached at various churches, and in particular in Sidmouth, although once he asked to preach at St Martin's in the Fields just by Trafalgar Square in London.

Fleming remained active until his death in 1945 at the great age of 95, although he became increasingly deaf. During his life he made achieved a tremendous amount. As he had no children, he bequeathed much of his estate to Christian charities in line with his beliefs.

He was noted for his phenomenal capacity for work. Apart from his researches and lectures he wrote over 100 books and many papers for learned magazines. However he will be chiefly remembered for the invention of the thermionic diode valve that changed wireless technology for ever and gave birth to the science of electronics that is at the heart of so much that is essential today.