The pentode valve or pentode vacuum tube is widely used in many amplifier applications. It provides a high level of gain, overcoming the ‘kink’ in the response curve of the tetrode valve.

In overcoming this non-linearity, the pentode valve or pentode vacuum tube is able to provide high levels of performance needed in many circuits. 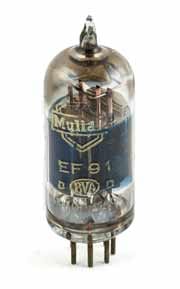 The pentode vacuum tube or pentode valve consists of five electrodes - hence the name pentode. In order from the centre where the heater is located these electrodes are:

The electrodes in the pentode tube are physically arranged concentrically around the cathode.

Diagrammatically in the circuit symbol used in the electronic circuit designs, the various grids are show in order between the cathode and the anode.

The typical pentode tube circuit or pentode valve circuit follows very much the format for the triode and beam tetrode circuits. Although grounded grid and other configurations were used, the common cathode circuit was by far the most widely used.

As usual the cathode has a resistor between it and ground. Current flowing through the cathode means that a voltage is developed across the resistor R2 and as the grid is at ground potential as a result of R3, this means that the grid operates with the required negative potential. R2 is decoupled to ensure that no signal is developed across the resistor.

R4 is normally a high value, often around 100kΩ raises the potential of the screen grid. It is decoupled to ground via C4. This ensures it is able to effectively act as a screen between the anode and control grid circuits.

R1 serves as the anode resistor across which the amplified signal is developed.